On the territory of Dimitrovgrad intersect main roads and railway arteries. Here pass the European Corridor №10 which connects Western Europe with Asia and Highway I – 5, part of the European Corridor №9 / Ruse - Makaza /, with direction north - south, Romania - Greece. Is analogous with the railway transport. Here is a major international junction in direction north - south, east – west.

The plain relief, varied by wooded hills and the Maritsa River, in the central part of the Municipality, determines its functional area distribution: the main part is occupied by agricultural land and the central – in line Haskovo – Dimitrovgrad – Radievo, as well as the peripheral northeast parts – by hills.

Dimitrovgrad Municipality occupies an area of 567,6 sq.km. Of them:

For extraction of mineral resources were used 12.63 km2, or 2.23% of the territory, today for the most part – unusable opencast mines.

The terrains, occupied with transport and infrastructure facilities, are 4.71 km2, or 0,83% of the municipal territory.

The urban network of the municipality consists of two cities – Dimitrovgrad, Merichleri and 25 villages, spread evenly on its territory. Besides functional the core - Dimitrovgrad is also the spatial center of the territory that has no serious relief barriers unless the Maritsa River and the uplands between Haskovo and Dimitrovgrad. 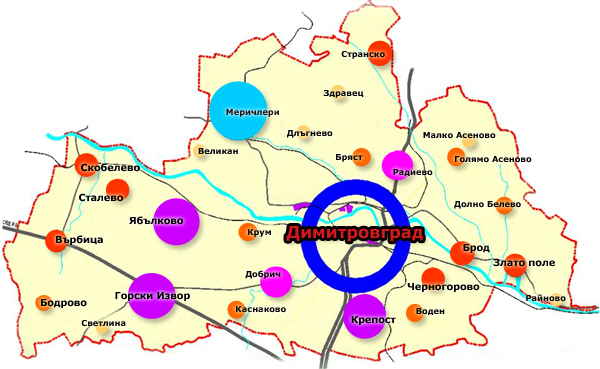 The landscape of the Municipality of Dimitrovgrad is mostly with flat appearance, uneven and rounded by low hills. About three quarters of the territory, in the north, has a slight slope to the south – southeast to the Maritsa River valley and is occupied by agricultural land. About one quarter is occupied by hills – near the village of Bryast and in the southeast part – on the north bank of Maritsa River. The landscape in the southern part of the Municipality is similar. The most of the territory is also occupied by agricultural plain areas with a slight slope to the north of the Maritsa River. In the middle of this section are the hills between the villages Krepost and Dobrich, and to the east section – to the municipal border – over the villages of Chernogorovo and Voden. The lowest part is along the valley of the Maritsa River - at Dimitrovgrad with altitude - 92 meters and rises in the northern part - above the village Stransko to 177 meters. To the south – in the middle part – between villages Krepost and Dobrich, the hills reach up to 258 meters above sea level ( Dolen sayrak), south of village Krepost – 266 meters ( Beytepe), and in the eastern part – above village Voden up to 170-216 meters. About this altitude are also the hills in the southwest part – above village Bodrovo.

The climate in the region is moderate continental, to Mediterranean. The average annual temperature in Dimitrovgrad is higher than the national average +12.6 ° C. This contributes for intensive processes of evaporation, especially during the summer months. The distribution of rainfall is uneven throughout the year. Identified are two maximums: vernal during the months of May – June and autumnal - during October-December. The basic minimum is during September, and the second - during February – March.

The natural complex of diverse landscape consisting of plains and hills creates favorable conditions for development of agriculture and livestock production. The relatively good water potentials, lack of threat to the ecological balance activities, are its wealth and prerequisite for the development of the Municipality of Dimitrovgrad - its strategic resource.

The structure of land resources is estimated to be balanced and adequate for the development of the municipality in the aspects of the main potential - agriculture.

The soils are mainly black soils - vertisols. Large spaces occupy also the cinnamon forest soils. In the valley of the Maritsa River are located meadow cinnamon soils. There are also found the most fertile meadow-alluvial soil and meadow-marsh soils, and to a smaller degree, the rendzinas alluvial soils. Prevailing are the lands of IV, V and VI category.

The main cultivated crops are the cereal – wheat: wheat, barley (about 50% of plantations), corn and sunflower (about 20%). About 34,000 acres are occupied by industrial crops (mainly cotton). The traditional to the Municipality production of vegetables has strongly decreased, and occupies about 10,000 acres. One of the municipal resources – meadows, common pastures and pastures has not been used effectively as a basis for livestock development.

The territory of Dimitrovgrad Municipality is characterized by diversity in terms of water supplies. Water resources are within the normal, but the small amount of rainfall, typical for the Municipality (annual average 600 l / m), requires intensive irrigation, which hinders the drinking water supply in some localities.

The rivers in this region are of the Aegean auriferous basin. Main water resource and water receiver is the Maritsa River and its feeders – the rivers: Kayaliyka, Banska, Merichlerska, Martinka with Arap gully.

The main water artery of the region, the Maritsa River, is with an area of the drainage basin to Dimitrovgrad - 14,616 square kilometers and water discharge amount- an average of 90, 7 cub. m. sec. The total volume of the passing through the city water masses is an average of 2860, 6 million cu. m. The flow of these feeders of Maritsa is small - total of about 104 million cu. m., which is the result of their mostly flat character, the small drainages and their minor moisture.

In the territory of the region there are also thermo-mineral waters. Such are the drillings in town Merichleri which represent a valuable water resource and have an exploitation debit of 30 l.sec. and water temperature of +35,4 ° C.